The illegal gold trade is at the center of violent struggles for power in the Democratic Republic of Congo (DRC). Government forces and militias vie over gold-rich areas, clearing the land for exploitation by committing crimes that force the displacement of civilians. According to the U.N., the mining and trade of gold provides the largest source of revenue to armed groups involved in the ongoing DRC conflict, considered to be one of the deadliest in the world.

Networks of foreign companies then buy gold from such groups but launder it using refiners and traders before they invest or resell it. And they generally do so without scrutiny or accountability. The Docket is gathering evidence and working with relevant law enforcement agencies to ensure that those involved in such crimes are brought to justice, including through prosecutions in European courts.

Conflict gold originating from the DRC is smuggled to neighboring countries, then to the UAE – which in 2020 imported gold worth $37 billion and ranks among the world’s leading importers of gold. The conflict gold is then purchased by international traders and buyers linked to networks of international corporations. These individuals and corporations are complicit in the human rights abuses and international crimes that are committed at the origin of their supply chain. And they do so without scrutiny or accountability.

In a team effort with The Sentry, The Docket is supporting prosecutors in the opening of a formal criminal investigation into complicity of major European gold traders in international crimes committed by armed groups operating in the Great Lakes Region. The Docket team will continue to gather evidence including relevant witnesses in support of the case.

The Docket’s involvement in the project is particularly timely, due to increased efforts from various stakeholders to strengthen due diligence in conflict minerals and responsible sourcing in high-risk countries, the increased regulations related to minerals supply chains but also the increased awareness of the general public in market countries on the issue of conflict minerals. While “conflict gold” has fueled conflict in the DRC for many years, legal proceedings in market country jurisdictions have the potential to disrupt the illicit trade of gold in Africa by creating a precedent against actors who have been operating with full impunity.

The Human Cost of Conflict Gold

Violent clashes in gold-rich Ituri province, and other areas of eastern Congo have left thousands of people dead and hundreds of thousands more displaced and the gold trade is a central driver to both the conflict and corruption in the country.

According to a report by The Sentry, armed groups in the country profit from the trade of artisanal and small-scale gold through mining, illegal taxation, raiding of mines, and collaborating with smugglers. Gold can also be traded for weapons and ammunition, enabling the conflict to continue. The various armed forces that profit from the trade have killed tens of thousands of people and engaged in extensive human rights abuses, including sexual and gender-based violence. Child labor, forced labor, exploitative debt, corporal punishment, and mine collapses are also common in the gold trade.

Women are victims of armed groups operating in DRC as U.N. experts have documented that mining areas know an increased rate of SGBV including rape and forced marriage. The illicit trade of gold fuels armed groups who commit atrocities including sexual violence, rape, in the eastern part of DRC in total impunity. Governments and companies need to take action against the corporate networks that traffic conflict gold and move it into the global economy.

The Golden Laundromat - Report by The Sentry 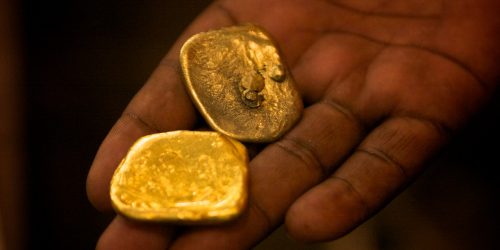