Empowering a Generation Every child deserves safe access to education

The carnage in Syria is one of the gravest security and humanitarian challenges of our time.

It has caused a generation of innocent children to be forced from their homes, and out of schools.  Millions of families have fled the war zones, and many children have not been to school since the war began in 2011.

Nearly a quarter of a million children are out of school in Lebanon.

Lebanon has the highest ratio of refugee to resident population of any country in the world. There are close to 1.5 million registered and unregistered refugees in Lebanon, which is about 1 in 4 members of the population. Close to a quarter of a million of these refugees are children who are not enrolled in school. Many Syrian refugee children are sent out to work for as little as 2 dollars per day with no hope of learning to read and write.

Why Education Matters
Syrian refugee children need and deserve the opportunity to rebuild their lives. To do that, they need access to education. Formal education offers more than the stability of a daily, safe routine, it gives children the chance to build a future wherever they may ultimately make their homes.

A quality education exposes students to critical thinking and a diversity of perspectives. It equips children with the capacity to navigate challenges, to find solutions, build communities, and then dream bigger. A generation of children without access to education is not only a moral failure, it is also a threat to regional stability and international security.

Access to education can make an immediate and profound impact: for example, studies have shown that even one year of schooling for boys can reduce their likelihood of being involved in conflict by 20%, and increased access to education is believed to significantly reduce the risk of civil war.

Giving refugee children access to education helps unshackle their ability to change their lives and those of generations to come.

This cannot become a lost generation.

Open Doors: Integrating Syrian Refugees into Lebanon’s Schools
The Clooney Foundation for Justice, with generous support from Google.org, partnered with UNICEF to enable 8 existing public schools in Lebanon to open their doors for after-hours “second shifts” to educate Syrian refugee children during the 2017-2018 school year. While many NGOs provide non-formal, and often ad hoc, education programs intended to maintain critical literacy and numeracy skills for refugees during displacement, CFJ believes that providing increased access to formal education is ultimately the best way to empower students to both continue their learning and expand opportunities for their future.

This permitted approximately 3,000 Syrian refugee children to get access to formal education during the 2017-2018 school year. One of those children was Dalaa, a 13-year-old refugee from Syria, pictured below. Dalaa moved from participating in informal educational opportunities in the tents of her refugee settlement to enrolling in formal education at the Riyak First Mixed Intermediate School in the Bekaa Valley. Dalaa described the difference in this way: “I enjoy it better here…I get to learn much more! In the tents, it was really cold. We did not have textbooks nor did we have the chance to interact with our teacher! Everyone deserves the opportunity to come to a good school and to be given the best chance to achieve their dreams.”

CFJ’s program is part of an initiative of the Lebanese Ministry of Education called “Reaching All Children with Education” (RACE). The objective of the program is “to ensure that vulnerable school-aged children affected by the Syria crisis are able to access quality formal and non-formal learning opportunities in safe and protective environments.” CFJ’s grant allowed 8 more schools to open their doors to refugee students.

The CFJ grant to UNICEF also funded:
• Outreach to families in refugee communities to support enrollment during the 2017-2018 year, especially those with the hardest to reach children who had never been to school, or who had been away due to child marriage or labor pressures.
• School-In-A-Box Kits for all enrolled children containing school supplies they needed in the classroom.
• Transportation to schools for children who needed it due to remote living situations and/or security concerns.

The CFJ-supported schools for academic year 2017-2018:
• Are located in geographically diverse areas throughout Lebanon where there are significant unmet needs on the part of the Syrian refugee population: One school in the Shouf district; two in Baabda; one in Baalbeck; one in Zahle; one in Nabatiye; one in Zgharta; and one in Akkar.

• Host students aged 6 to 16, with most also having programs for younger children.
• Range in size from hosting 237 to 825 refugee students, with an average class size of 32 students.

Technology Pilot
CFJ is also partnering with HP to pilot innovative technology in the 8 CFJ-supported schools and one additional school – in Saida, south of Beirut. Currently, students in Lebanon’s public schools do not have reliable access to computers during the school day. Where computers are available, they are few in number and outdated.

With HP’s help, CFJ is changing this. In all 9 schools, HP has deployed notebook PCs for use by teachers and students — in individual classrooms, at each desk, for use by every student. This will mark a powerful change from the status quo. Technology will neither be incidental nor extra-curricular, but rather deeply integrated into daily learning at the 9 schools where CFJ is piloting this technology initiative.

In order to bring lessons alive for students, HP has also partnered with software providers to equip the computers we have provided with programs that teachers can use to design customized lesson plans in order to bring elements of the Lebanese curriculum to students’ fingertips through interactive and engaging activities and quizzes. This kind of tailored, technology-empowered learning will in turn allow teachers to track the progress of individual students, tailor material to them, and ensure that nobody is left behind. All of this is being designed to work in low-connectivity environments, such that educational materials can be “seeded” from a teacher’s device to multiple student devices without requiring access to the internet.

Experience with technology will give refugee students another tool with which they can ultimately engage the global community and pursue further opportunities. One student at a CFJ-supported school, Amina, a 15-year-old from Syria (pictured below on the right) is hungry for this kind of opportunity: “It would be good if we could use computers at school. Most of us don’t know how to use them – so if the teachers were able to teach us I know it would be very good for us. We know we’re going to need to rely on computer skills when we go for jobs.” As part of CFJ’s collaboration with HP, Lebanon’s public school teachers working at the CFJ-supported schools are receiving in-depth training on teaching with technology so that they can expand their skills and enhance the learning experience for all of their students.

A director at another one of the CFJ-supported schools, Mme. Claude Harfouche explains that access to technology contributes to academic excellence more generally: “Support for [CFJ’s] plan to introduce innovative and new technologies will push the school towards my aim of excellence. We know that when the students are given something new it creates an urge and a motivation to learn.”

CFJ’s hope is that this technology can not only improve learning outcomes within these classrooms, but can also generate important lessons learned to benefit Lebanon’s schools across the board.

Providing both teachers and students in CFJ schools with training and support will ultimately lead to a robust and sustainable program for Lebanon’s schools. As a CFJ-supported school director Mme. Claude Harfouche describes: “When you give a teacher a low level of support, they can only deliver a low level of education in return. When you give them full support, this helps them raise their level to the very highest. Whatever we can give the teachers will be reflected in their results. Our teachers and students deserve the latest and the best – to compete in the world.” She’s right. And that’s why we are proud to work with HP to bring cutting-edge technology and training to these schools.

Marah (pictured below on the left) is 12 years old and attended one of the CFJ-supported schools in 2017-2018. She tells a familiar tale: “When I first arrived in Lebanon, I was unable to join a school – there was no provision for children like me. In Syria, I only completed half a year of school, then I was out of school for a full year. I like it here…My favorite lesson is English…To be able to learn languages here is good, and it will help me as I grow older and can meet other people and let them understand me.”

Abdulrahman, 15-years-old and pictured below, arrived in Lebanon from Homs, Syria with his family. When he arrived in Lebanon, he was sent to work in a restaurant for 4 years to help support his family’s basic needs. In 2017-2018, he re-enrolled at a CFJ-supported public school and restarted his formal education. “Now,” he says, “every day I wake and am happy to go to school.”

The Syrian crisis has robbed too many of their lives, their families, their homes, and their futures. As innocent children flee across international borders in search of safety, it is incumbent on all of us to ensure they are able to continue to learn, lest we lose an entire generation. We are proud to help brave refugee children unlock their potential and build a future for themselves – and future generations.

Click below to see the school work of students in CFJ-supported schools from the 2017-2018 school year. 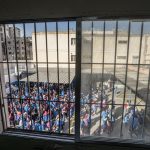 Students wait excitedly for the bell to ring in the playground of CFJ-supported Hussein Ali Nasser secondary school for boys. The decorated hallways of Chhim Public School, a CFJ-supported school in Lebanon.