In Nigeria, TrialWatch is documenting how the police—whose notorious brutality was the subject of the 2020 ‘EndSARs’ protests—are also complicit in abusive prosecutions. CFJ’s partner the American Bar Association Center for Human Rights has monitored five trials in which police prosecutors have pursued spurious cases.

At the same time, TrialWatch is also monitoring the crackdown on members of vulnerable groups, including in particular prosecutions of individuals on the basis of their actual or perceived sexual orientation or gender identity. One of the five trials was that of 47 men arrested during a raid on the Kelly Ann Hotel and charged with violating Nigeria’s Same Sex Marriage Prohibition Act in the first case under the law.

The police were ‘mobilized’ to respond to a ‘gay initiation’ and arrested forty-seven men in a raid on a hotel. The men were paraded in front of the public (in some cases, forcibly “outing” them). As a result, some lost jobs, another was forced to leave his home because his family told him he had “brought shame on” them, and at least one defendant reported being assaulted. Several defendants asserted that they were mistreated after their arrest, with the police trying to coerce the into confessing that they were ‘cultists.’ One said for instance, “I was accused of being a cultist and was ordered to write a statement. When I refused to do so, I was brutalized by the police. I had to tell them what they wanted to hear in order to save myself from further brutalization.” Over the course of six hearings stretching from December 2019 through October 2020, the prosecution produced no relevant evidence and the case was eventually struck out. The report on the case gave the proceedings a grade of ‘D’ and found that “[t]he men were arrested, detained, and prosecuted on the basis of their actual or imputed sexual orientation” and that the case entailed severe prosecutorial misconduct.

Journalist and opposition figure Omoyele Sowore is facing charges of treason and conspiracy to commit treason for tweeting about protests under the tagline #RevolutionNow.  After his arrest, Sowore was kept in detention despite a court order releasing him.  The case was initially brought by a security agency, but the Attorney General’s office had to take over the prosecution, and dropped five of the seven charges.   A preliminary report on the case concludes that the charges appear to have been brought because the protests Sowore sought to organize were “at odds with the Buhari government’s agenda,” explaining that “[c]alls for peaceful protest do not constitute treason.”  Meanwhile, the case continues to drag on, with Mr. Sowore continuing to face harassment.

Erosomele Adene and Nicholas Mbah were both arrested for their involvement in the EndSARS protests against police brutality and prosecuted by police prosecutors. A report covering both cases found that the police use not only force, but the criminal justice system to silence and retaliate against their critics. The trials were given a ‘D’ by TrialWatch experts.

Samuel Ogundipe, then a journalist for Nigeria’s Premium Times, was prosecuted by SARS itself for allegedly disclosing details of leaked police documents in his reporting. Since Mr. Ogundipe’s arraignment in 2018, and subsequent release on bail, the SARS prosecutors have let his case languish, suggesting a lack of evidence. 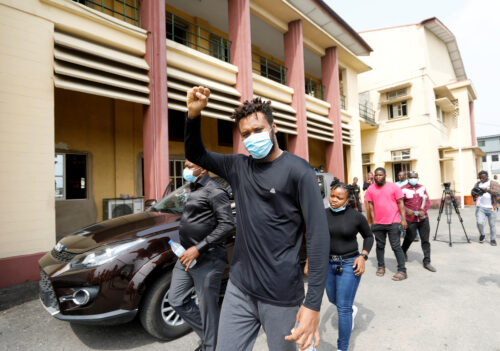 Report Documents Abusive Use of Anti-LGBTQ Law in Nigeria These cases show how the Nigerian authorities have used criminal charges, detention, and trials to retaliate against those who have peacefully participated in the #EndSARS demonstrations against police brutality. The 47 defendants in this case were among a group of 57 men rounded up and arrested at a hotel in Nigeria without a warrant. The men were arrested for alleged same-sex relationships, which is a violation of Nigeria’s 2013 “Same Sex Marriage Prohibition Act.”