At CFJ our aim is to wage justice to create a world where human rights are protected and no one is above the law. We seek to bend the arc of history towards justice.

Our impact can be measured in individual cases – was an innocent person freed or a guilty one prosecuted? Did a woman receive compensation for abuse, or a child get the right to go to school? But through these cases we also try to change the system – to expose corrupt authorities, reform unfair laws and move the needle from impunity towards accountability. CFJ is now working in over 40 countries through three initiatives. Our TrialWatch initiative has led to innocent journalists, women, and minorities being freed from imprisonment after we exposed their sham trials. The Docket is gathering evidence of war crimes from the Congo to Venezuela, Sudan, and now Ukraine – and sharing this with prosecutors to trigger trials against the perpetrators. And our new Waging Justice for Women initiative has already helped to give pregnant and married schoolgirls in Tanzania the right to complete their education.

We are proud of the impact we have achieved: by  freeing the innocent, triggering prosecutions against those guilty of atrocities, reforming discriminatory laws, and obtaining reparations for victims.

A few examples of our successes are below.

Securing the Release of Journalists and Political Leaders

Without Amal's tireless, dedicated and intelligent work, I would still be languishing in a prison cell in the Maldives, and the prospects for me personally, and for the restoration of democracy in my homeland, would be very dark.

Recipient of multiple awards including the Committee to Protect Journalists’ Gwen Ifill Award for ‘extraordinary and sustained achievement in the cause of press freedom’ and the American Society of International Law’s Champion of the International Rule of Law’ award, CFJ Co-Founder Amal Clooney has successfully freed clients even in the most challenging legal landscapes. This includes Reuters journalists Wa Lone and Kyaw Soe Oo, detained in Myanmar following their coverage of the genocide of Rohingya Muslims, Al Jazeera’s former bureau chief for Egypt, Mohamed Fahmy, and former President of the Maldives Mohamed Nasheed. Amal has helped defend me since 2019, and I’m a rarity for her because she can actually talk to me. In the past, her journalist clients were in prison, and she worked to free them by combining law with an incisive understanding of politics, pragmatism, and public advocacy.

Journalist and Nobel Laureate Maria Ressa, facing the rest of her life behind bars in the Philippines

TrialWatch monitored the trial of Moroccan journalist Hajar Raissouni and released a report exposing her sham trial. She was then freed and pardoned following the international attention drawn to her case. TrialWatch Expert Baroness Helena Kennedy KC – Director of the International Bar Association’s Human Rights Institute – graded the trial a “D”.

Ms. Raissouni – a journalist for one of Morocco’s few independent newspapers – was charged with the ‘crimes’ of abortion and extra-marital sex after reporting that was critical of the government and convicted after a sham process in which she was denied access to a lawyer. Through my experience, I think that TrialWatch is important because it documented all events and exposed human rights violations, and this is important for political detainees who are released from prison with nothing but their dignity.

Ugandan women’s rights activist Dr. Stella Nyanzi’s conviction was overturned on the basis of violations identified by a TrialWatch report submitted to a Ugandan appeals court. Dr. Nyanzi was prosecuted for posting a poem critical of the Ugandan President on Facebook in a trial which TrialWatch monitored and graded a “D”. 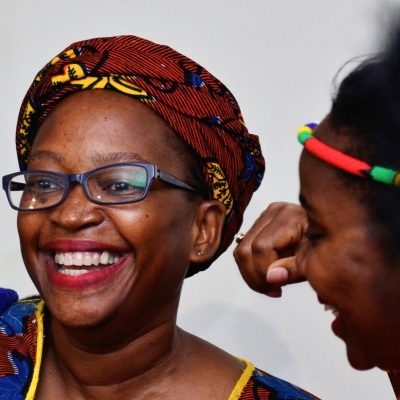 [Thanks to TrialWatch] my case was immediately elevated. And the prosecutors… the magistrate… they should have been on alert to know that someone else other than themselves was monitoring the process and going to give a grade.

When survivors seek justice, they look for someone to give them hope that justice is possible. Amal gave me and many survivors hope that we will achieve justice. I am grateful to Amal for her tireless work to bring ISIS members to court.

CFJ Co-Founder Amal Clooney has represented Yazidi women in the only two cases anywhere in the world in which ISIS fighters have been convicted of genocide. In one case, Amal represented a Yazidi woman who provided the key evidence that sealed the genocide conviction against the defendant, an ISIS member who had enslaved and abused the woman and killed her 5-year-old daughter. This led to the first conviction of an ISIS fighter for genocide in any courtroom in the world. She has also represented victims in five other trials that have led to convictions of ISIS fighters for war crimes and for crimes against humanity. And she represents Yazidi Nobel Laureate Nadia Murad. Amal and the CFJ team continue to work with Yazidi survivors in their quest for justice.

[Amal’s] inspiring leadership, her brilliant legal acumen and her persistent stubbornness really helped the Security Council to pass Resolution 2379 that established the United Nations Investigative Team to Promote Accountability for the Crimes of ISIS.

Since the outbreak of war in Ukraine, CFJ has carried out field missions and engaged in extensive open-source intelligence gathering and cutting-edge forensic analysis. CFJ’s Docket team has already shared evidence with prosecutors in European jurisdictions, to trigger criminal trials against Russian soldiers and give survivors an unprecedented chance to seek justice. Russian soldiers and Russian commanders are on notice. For now, they think they are invincible – largely because Russian forces have not faced justice for similar crimes in Chechnya, Georgia or Syria. But today there’s a new playbook.

Anya Neistat, Legal Director of The Docket, writing in The Guardian

Prosecuting Crimes against Humanity in Darfur

CFJ Co-President Amal Clooney and CFJ staff represented 126 Darfuri survivors at the International Criminal Court in the first case involving crimes against civilians in Darfur. In July 2021, the ICC unanimously confirmed all 31 charges against warlord Ali Kushayb, and his trial is ongoing. Ms. Clooney is now Special Advisor to the Prosecutor of the International Criminal Court on Darfur and alongside CFJ lawyers, seeks to ensure that Omar Al Bashir and others will also be in the dock in The Hague.

I have the great honour that Amal accepted an invitation to be my Special Advisor on Sudan, which is a testament for the many years of work that she has done in Sudan and of course also her husband George Clooney and the Clooney Foundation for Justice.

Prosecuting Crimes against Humanity in Venezuela

CFJ and Venezuelan human rights organization Foro Penal submitted a dossier of evidence to the Office of the Prosecutor of the International Criminal Court to support investigations against crimes against humanity, torture, arbitrary detention and sexual abuse committed by state officials of the Maduro regime in Venezuela. This evidence will contribute to the first-ever ICC investigation in a Latin American country.

Given the lack of a genuine investigation at the domestic level, many victims we represent look at the ICC as their only hope for justice and we owe it to people putting themselves in danger to fight for that justice.

CFJ intervened in support of Salvadorian women in a landmark case before the Inter-American Court of Human Rights challenging El Salvador’s prosecution of women who have undergone obstetric emergencies that result in pregnancy loss under draconian anti-abortion laws.  The Court ordered $200,000 in compensation for the victims, legal reforms to women’s healthcare in El Salvador, increased privacy protections, and training for people working in the justice sector to prevent such abuses in the future.

The Clooney Foundation for Justice filed a submission alongside local partners, Equality Now, and Tike Mwambipile, executive director of the Tanzania Women Lawyers’ Association, to challenge Tanzania’s policy of banning married and pregnant girls from school in a landmark case before the African Court of Human and Peoples’ Rights. The Tanzanian Government has already u-turned, announcing a reversal of this discriminatory policy that impacts more than 1 in 4 girls of high school age in the country.

Compensating Survivors of the War in Ukraine

Our Co-Founder Amal Clooney is advising the Ukrainian Government on the creation of international mechanisms for prosecutions and reparations for Russian war crimes. One aspect of this work concerns a United Nations-sponsored compensation commission. In November 2022 the UN General Assembly established the first step towards this landmark accountability mechanism by creating an ‘international register of damage’ to gather evidence of harms suffered by civilians in the war.