FEATURE: Rainbow Mary and the Fight for Poland’s Future Anna Prus holds up the church display that describes “LGBT” and “gender” as sins. © Przemyslaw Stefaniak 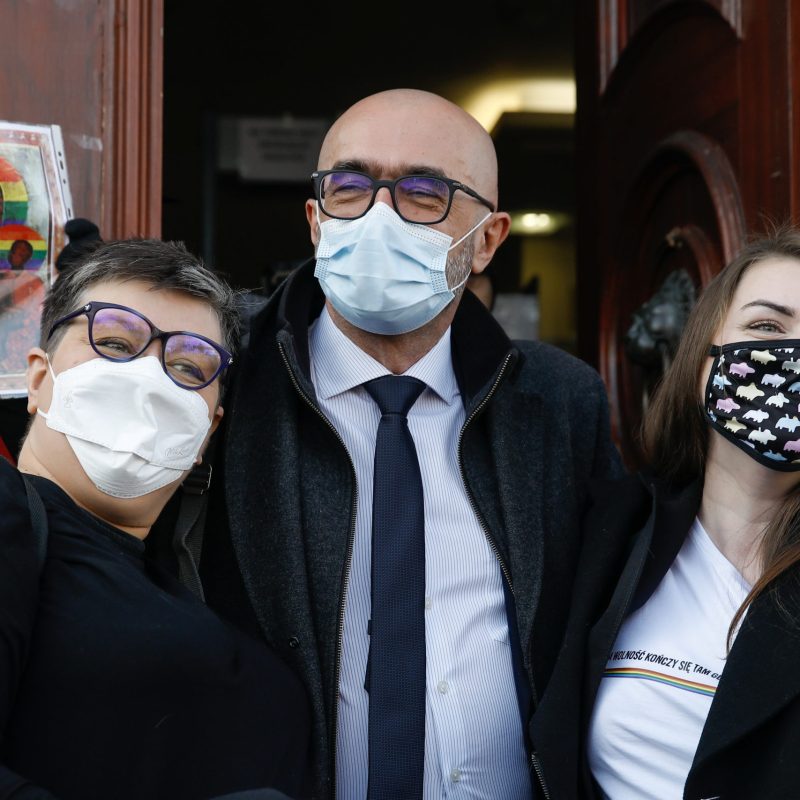 Elzbieta Podlesna, Anna Prus and their lawyer come out of a court, as people gather in solidarity with the Polish LGBT activists accused of offending religious beliefs by putting a rainbow on a painting of Virgin Mary, in Plock, Poland, March 2, 2021. REUTERS/Kacper Pempel Elzbieta Podlesna and Anna Prus join people who gathered in solidarity with them. March 2, 2021. REUTERS/Kacper Pempel A person holds an image of Virgin Mary with a rainbow halo as people gather outside a court in solidarity with three Polish LGBT activists accused of offending religious beliefs with the painting, in Plock, Poland, March 2, 2021. REUTERS/Kacper Pempel

For eight hours, Anna stood in a stuffy courtroom barely able to breathe waiting to hear the verdict in her case. Anna and two friends were facing a prison sentence for “offending religious feelings” in Poland.

Nearly two years earlier, in April 2019, Anna Prus, Elżbieta Podleśna, and Joanna Gzyra-Iskandar Podleśna had driven in the dead of night to the Polish town of Plock – 110km northwest of Warsaw – and put up the now famous stickers of the Virgin Mary with a rainbow halo, along with other posters supporting LGBTIQ+ rights. The three had no idea they were about to spark an international media storm.

Throughout the three court dates, the rainbow flag was compared to a swastika, the word  “homolobby” was thrown about for anyone in favour of gay rights, and homosexuality itself was described as an “abomination.”

On that first day, at one point someone opened the windows in the courtroom. The sounds of people singing and chanting in solidarity drifted in from the street, but the windows were rapidly closed at the request of the conservative activist who had been one of the ‘auxiliary prosecutors’ who helped to bring the case.

Anna told the Clooney Foundation for Justice they all felt compelled to act in response to a display the church in Plock had put up for Easter. The display was a crucifix surrounded by wooden boxes with different sins written on them, including “LGBT” and “gender.”

“I was so sad and angry when I saw that,” said Anna. “I messaged a group chat and said ‘we have to go and do something about Plock.’”

The group immediately started planning. They already had the rainbow halo stickers printed from previous protests – about the church’s failure to tackle its pedophilia scandal – which had not received much attention.

“The stickers weren’t new, and we didn’t think for a moment they would be seen as offensive or cause all this, but it was around Easter and around elections so I guess that is why,” Anna said.

“Really at that time we were thinking mostly of LGBTIQ+ youth. We wanted them to wake up in the morning and see the rainbows and know they were not alone,” she added, recalling that she thought the worst that could happen was a fine for putting up posters without permission.

She laughs at that thought now, looking back at everything that followed.

Anna and her friends ended up being charged with “offend[ing] the religious feelings of other persons by publicly insulting an object of religious worship” under Article 196 of Poland’s Criminal Code – an offence which could carry up to two years in prison.

The Clooney Foundation for Justice’s partner, the American Bar Association Center for Human Rights, monitored the trial as part of CFJ’s TrialWatch initiative.  In a Fairness Report released today, TrialWatch’s legal expert Lisa Davis, the Co-Director of the Human Rights & Gender Justice Clinic at CUNY Law School, said that even though Anna, Elżbieta, and Joanna were eventually acquitted, “the trial was characterized by violations of international and regional standards that resulted in significant harm to the defendants.”

“The charges were wholly brought based on improper motives: to discriminate on the basis of sexual orientation and gender identity,” the report said, adding that the proceedings violated the women’s right to free expression.

The prosecution is appealing the acquittal, so the ordeal is not over yet. Anna feels that the significance of the trial was not in the verdict but that it happened to begin with.

The arrest and trial were triggered by a complaint from a priest at the church in Plock that had put up the anti-LGBTIQ+ display, Tadeusz Łebkowski. He, along with well-known anti-abortion and “pro-family” activist Kaja Godek who said she saw the posters, supported the Polish prosecutors in bringing the case.

“In that courtroom, it wasn’t just us on one side and the Bishop and conservative politicians on the other, it felt like a battle for Poland, what kind of country Poland is going to be,” Anna told CFJ.

“It was clear that Article 196 was but a vehicle to pummel the LGBTIQ+ community,” the Fairness Report said.

The trial is just one part of the ruling PiS Party’s anti-LGBTIQ+ agenda, which has come to dominate Poland. Throughout President Duda’s re-election campaign in 2020, he repeatedly made homophobic statements, such as deeming “LGBT ideology” “even more destructive” than communism. In 2019 – the same year the activists put up the posters – many local authorities passed resolutions opposing “LGBT ideology” and declaring themselves “LGBT-free zones.” Some of those resolutions have since been annulled by courts in response to complaints filed by the Polish Ombudsman for Human Rights, but hate crimes have increased and peaceful LGBTIQ+ activists have faced targeted arrests and prosecutions.

The activists were given a chance to speak in the proceedings.  Elżbieta Podlesna told the court that LGBTIQ+ people “have the same place in our society and the right to a safe life as the politicians, people aspiring to politics and priests that incite hatred against them.” Anna spoke about the prevalence of suicidal thoughts among LGBTIQ+ youth in Poland, and the hypocrisy of the church in not dealing with its own scandals while denouncing homosexuality.

“We realised that this is one case among many, and believed it to be a part of a growing hate campaign,” Anna said in court. “What angered us was the hypocrisy, the silencing of the issue of paedophilia in church. We wanted to point at the real sinner (or, in secular terms, a criminal), and who deserves care, protection and unconditional support.”

As they waited for the verdict, Anna could hear “You’ll Never Walk Alone” and other songs from the street outside. Thinking back to that time, she becomes quite emotional.

“It was overwhelming, the support was great for us, but also for LGBTIQ+ youth to see people coming out and saying that what these people are saying is not okay. What the judge said – that was very important to me – not because she said we weren’t guilty, but because she said that the rainbow isn’t something offensive.”

Anna, Elżbieta, and Joanna must now prepare themselves for the possibility that their acquittal will be reversed as the prosecution’s appeal is set to start on November 10. Anna doesn’t know what to expect, but she knows she’ll carry on making sure LGBTIQ+ kids know they have support in Poland.

“We have this great lawyer, he’s doing this for free because he believes in us and our cause. We have this international coverage because of what the Bishop said, people now really can see what it is like in Poland. He did a great job for us, honestly.”

The world will be watching what happens next in the case of Rainbow Mary.